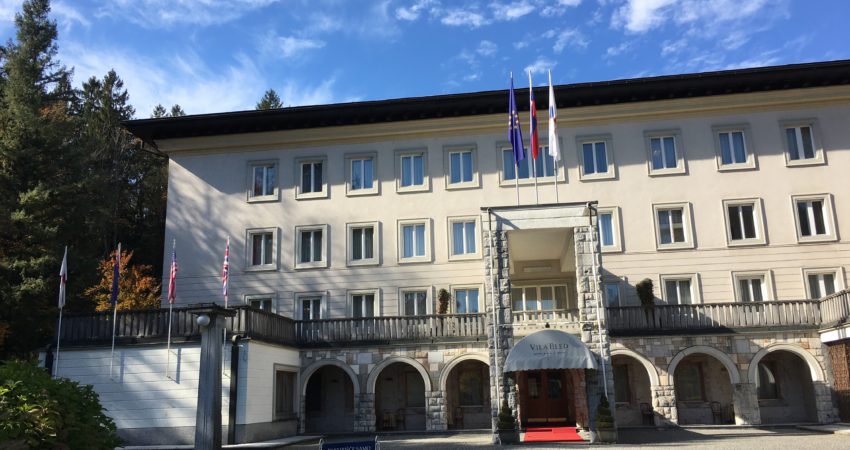 In the Slovenian town of Bled you can visit a very interesting villa which serves now as a luxury hotel but it used to be a luxurious summer residence of communist President Josip Broz Tito. President Tito maintained a lavish lifestyle. Besides the Summer Residence in Bled he stayed in Belgrade, capital of Yugoslavia, in the official residence called Beli dvor and he had a separate private house. In the Brijuni islands he had the State Summer Residence since 1949. The pavilion was designed by Joze Plecnik, one of the best Slovenian architects and included a zoo. Around 100 foreign heads of state visited Tito there and many film stars including: Elizabeth Taylor, Richard Burton, Sophia Loren, Carlo Ponti, and Gina Lollobrigida. Tito loved hunting and he often went to a village Karađorđevo where he hunted with his diplomatic relations. He also hunted in the park surrounding Vila Bled. By 1974 the Yugoslav President had at his disposal 32 official residences, the yacht Galeb (“seagull”), a Boeing 727 as the presidential airplane and the Blue Train. 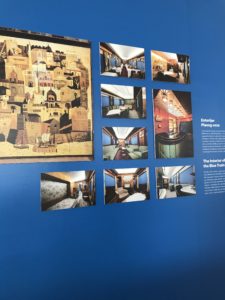 Interior of the Blue train, photo taken at the exposition at Tito’s Mausoleum in Belgrado. © Communications-Unlimited.nl

History: Vila Bled through the ages

Austrian aristocrat Duke Ernest Windischgrätz built a large two-storey villa between 1883-1885  with corner turrets that resembled an English country mansion on the site where the Vila Bled stands today.

Otto Windischgrätz, Ernest’s son, married in 1902 Elisabeth, the Austro-Hungarian emperor’s granddaughter. The first stop on their honeymoon was Bled, where they spent several days in the villa.

Suvobor Mansion of the king of the new Kingdom of Serbs, Croats and Slovenes

The villa was owned by the Windischgrätz family until 1922, whereupon it was purchased by Alexander Karađorđević, the young, just married king of the new Kingdom of Serbs, Croats and Slovenes. His wife, Queen Mary and their three children, were particularly fond of the place and spent all their summers here. The youngest, Prince André, was born in the villa. The villa was renamed the Suvobor Mansion to commemorate an important victory by the Serbian army over the Austro-Hungarian empire.

The Yugoslav royal family planned the construction of a new villa that was to be built close to the Suvobor mansion. The plans for this new royal residence were designed by the famous Slovene architect Jože Plečnik. However, by the time of King Alexander’s death in 1934, just the 30-metre pillars above the lake had been constructed, upon which the Belvedere Pavilion stands today.

Following Alexander’s death, the old building, the Suvobor Mansion, was torn down and construction of a new villa was begun in its place. The plans for this villa were designed by architect Fürst. However, this was interrupted by the advent of the Second World War.

Construction of the unfinished building was taken over by architect Vinko Glanz after World War II. The original plans were slightly adapted and instructions by Tito were followed. Numerous valuable materials were used. 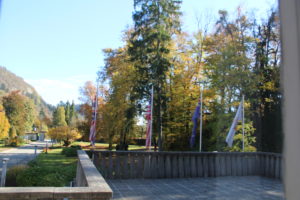 It is huge, spacious, and you can either reach it via pletna boats or by a very long driveway. It is surrounded by an amazing park with the view on one of the most famous tourism destinations of Slovenia: the church on the little island in the middle of the Bled lake.

The villa is surrounded by a huge park where Tito used to hunt with his diplomatic relations. The villa is built to impress or if you wish to intimidate. We are impressed, we really are. It looks as if the time stopped, as if Tito and his guests were just about to stroll in the park. It has been of course modernized but the character of the building and its features have been respected. We enter the building and go to the bar which used to be the garage of President Tito’s. So it is here where he parked his limousines. 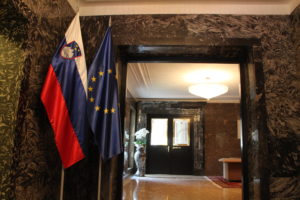 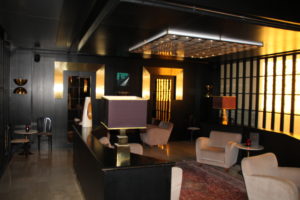 In a private lift of President’s Tito

On the highest floor, floor 3 room 320 a private apartment of Tito’s is located. To get there we were allowed to take a private lift of Tito’s. https://www.youtube.com/watch?v=CwJ6BpCihLM&t=4s

It is there, behind the elegant wooden door, situated at a spacious, light elegant hall. A private apartment of President’s Tito which consists of three rooms: parlour, office and a spacious bedroom with an elegant bathroom. In the study room there is a Tito’s portrait. He is elegantly dressed, as we recognize him from the archive films. His desk with an antique black telephone is situated just below the portrait. 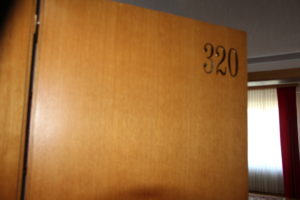 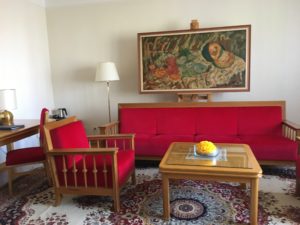 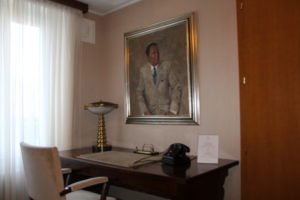 The bed, the nurse, the wife

From there we move to another apartment with a very famous bed. It is here where President Tito stayed after he was operated on his kidney stones. He was taken care by his secretary, Jovanka Budisavljević. She was a lieutenant colonel in the Yugoslav People’s Army and became his 4th and last wife. 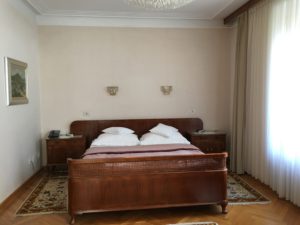 On the ground floor there is a concert hall which Tito used for receptions of delegations and other events. It was also his private cinema where he loved to sit in the evening and smoke a cigar, a Cuban sigar. You can still buy the cigars in the hotel. His favourite films were westerns. Concert Hall is also famous for its mural. 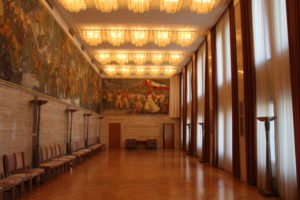 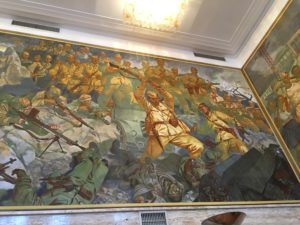 In the left upper corner the bombing of the parliament in Belgrade is shown. The gathering of the first partisan troops follows. According to some explanations, the soldier whose back is turned to the viewer and whose face cannot be seen is Tito. Many faces are repeated throughout the mural as Slavko Pengov asked the then employees of the Vila Bled and prisoners of war who helped build it after the end of WWII to stand as ‘models’. A town in Bosnia is depicted next, and the capitulation of Italy follows (an Italian soldier holding his arms up).

The central part of the mural shows three battles: the battle of the Neretva, the battle of Sutjeska and Igman marsh. At the end of the longer wall the liberation is depicted, in the right upper corner is a blossoming cherry tree as the harbinger of spring.

Post-war construction is depicted on the shorter wall. The factory in the background is said to be the Ljubljana Litostroj, in front of it is the youth of Yugoslavia: students, miners, workers, farmers and so on; the Yugoslav flag is being carried by a woman from Bosnia. There are shutters in the flag from where films were projected for Tito onto the opposite wall.

This unique hall is often used as a wedding reception. Sometimes though, the guests wish is to cover the mural and not to be confronted with the past.

The Belvedere Pavilion is an exceptional building set on 30-metre pillars in the hotel park. The edifice was designed by architect Jože Plečnik, as the reception area of a new royal residence, the plans for which never came to fruition. Later, it was used by Tito for relaxed tea parties. Nowadays, it is a café. 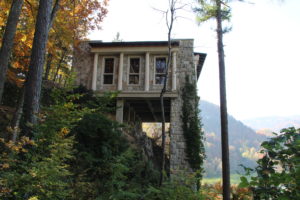