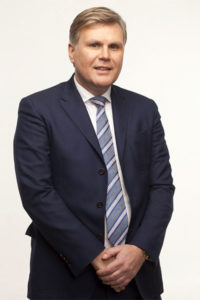 Aloys Bruggeman RE RA has been advising the major players in the Netherlands and beyond, including World 5, for more than 25 years. He completed his post master studies at Tilburg University in the field of accountancy. Furthermore he graduated at the Vrije University of Amsterdam ( VU Amsterdam) from the post master EDP Audit department and last not least he completed postgraduate studies organised by the Maastricht School of Management Executive Education Programme in Management in cooperation with the Maastricht Leadership Academy.

He therefore has both IT and Finance knowledge and worked at such consultancy firms as KPMG, PWC, IBM and APG. In this last position, he and a team checked the global investments of more than EUR 400 billion.
In his career, he was responsible for many national and international projects, including in Germany, Ghana, Poland and the United States.
Aloys is affiliated with the University of Tilburg and Zuyd University, where he teaches courses in internal control to poster master students at the Accountancy department. Aloys also provides lessons, training and lectures for various government organizations and commercial companies, such as: Amsterdam University of Applied Sciences, IBM etc.

Aloys was born in Heerlen, in the southern region of the Netherlands, Limburg. His both parents witnessed the terror of World War II, his father in Limburg and his mother in Indonesia. As a result both of them are civilian war invalids and the war was always present in his families everyday life. He knew from his early days how important personal freedom is and how devastating totalitarian system could be. As a result he developed a deep interest in the communistic regime, reading books about the subject and while in the end of the 70s/begin 80s people in the Netherlands were against placing American medium-raged weapons he became member of an anti -communism organisation. He knew that Communism is as dangerous as National Socialism and that it has no place in a free Europe.