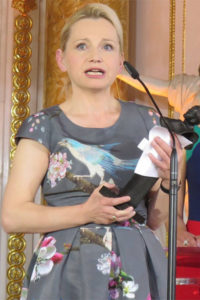 Beata Bruggeman-Sękowska is an award-winning Dutch-Polish journalist, laureate of the Merits of Poland and Polish People Abroad and of the Marshal of the Senate of the Republic of Poland award for journalists.
She is an international CEE professional, founder of the Central and Eastern Europe Center, media commentator, author of seven books, publications about Central and Eastern Europe and a lecturer.

Beata Bruggeman-Sękowska was born in Warsaw, Poland and has also Armenian blood and roots in Lviv, which is now part of Ukraine. She lives in the Netherlands, Limburg.

She was raised dually in a communist Poland where she got propaganda lessons at school and she was taught at home by her parents how the real world is really like. She wanted to know why totalitarian systems exist. From that moment she got fascinated by intercultural communication, Central and Eastern Europe, politics, languages, culture and psychology, which gave her a feeling of freedom.

Due to her deep interest in people and communication between people especially beyond the borders she followed English and American Studies at Warsaw University. She studied among others culture, literature, history, mass culture, ethnicity issues, political issues, gender studies, philosophy and psychology. After receiving her master title she also completed post-master studies in Journalism organised by L’Ecole Superiere de Journalisme de Lille and Warsaw University with the cooperation of the College of Europe. She received ‘Diplôme en Journalisme Européen’.