On December 13 1981 in the morning Polish people woke up in the new shocking reality caused by the totalitarian communist system.

On the television they saw General Jaruzelski- Prime Minister and the First Secretary of The Party announcing: 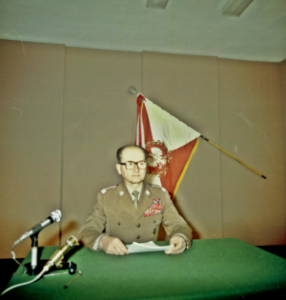 ”Today I address myself to you as a soldier and as the head of the Polish government. I address you concerning extraordinarily important questions. Our homeland is at the edge of an abyss. The achievements of many generations and the Polish home that has been built up from the dust are about to turn into ruins. State structures are ceasing to function. Each day delivers new blows to the waning economy.”

”I declare that today, the army council of national salvation, has been constituted. The council of state, obeying the constitution, declared a state of war (at midnight) on the territory of Poland.” (Read more here: https://www.upi.com/Archives/1981/12/14/Excerpts-from-Prime-Minister-Wojciech-Jaruzelskis-speech-declaring-martial/2638377154000/)

The Communist party in the years 1980-1981 experienced a huge crisis involving the growing popularity of  Solidarity movement and demands, poor economic situation of Poland and at the same time the Soviets were not satissfied with the situation in Poland. General Jaruzelski believed that introducing the military state would prevent the Russian intervention.

The authoritarian communist government of the People’s Republic of Poland drastically restricted  life in Poland by introducing martial law in order to crash political opposition. Severe repressions started: thousands of opposition activists were put in prison  without charge and as many as 91 were killed. Many political prisoners were not released in 1983 when the martial law finished but in 1986 a year of the general amnesty.

Various pro-democratic organisations and movements including Solidarity were banned.

President Reagan on December 23  issued ”Address to the Nation about Christmas and the Situation in Poland”.

”As I speak to you tonight, the fate of a proud and ancient nation hangs in the balance. For a thousand years, Christmas has been celebrated in Poland, a land of deep religious faith, but this Christmas brings little joy to the courageous Polish people. They have been betrayed by their own government.”

”The men who rule them and their totalitarian allies fear the very freedom that the Polish people cherish. They have answered the stirrings of liberty with brute force, killings, mass arrests, and the setting up of concentration camps. Lech Walesa and other Solidarity leaders are imprisoned, their fate unknown. Factories, mines, universities, and homes have been assaulted.”

”The Polish Government has trampled underfoot solemn commitments to the UN Charter and the Helsinki accords. It has even broken the Gdansk agreement of August 1980, by which the Polish Government recognized the basic right of its people to form free trade unions and to strike.” (Read the whole speech here: https://www.reaganlibrary.gov/research/speeches/122381e, or watch it below )

”In order to aid the suffering Polish people during this critical period, we will continue the shipment of food through private humanitarian channels, but only so long as we know that the Polish people themselves receive the food. The neighboring country of Austria has opened her doors to refugees from Poland. I have therefore directed that American assistance, including supplies of basic foodstuffs, be offered to aid the Austrians in providing for these refugees.

But to underscore our fundamental opposition to the repressive actions taken by the Polish Government against its own people, the administration has suspended all government-sponsored shipments of agricultural and dairy products to the Polish Government. This suspension will remain in force until absolute assurances are received that distribution of these products is monitored and guaranteed by independent agencies. We must be sure that every bit of food provided by America goes to the Polish people, not to their oppressors.

The United States is taking immediate action to suspend major elements of our economic relationships with the Polish Government.”

The article was published on the website of the Central and Eastern Europe Center Communications-Unlimited.nl: https://www.communications-unlimited.nl/13-december-martial-law-in-poland-3/