The International Day of Heroes of the Fight Against Totalitarianism 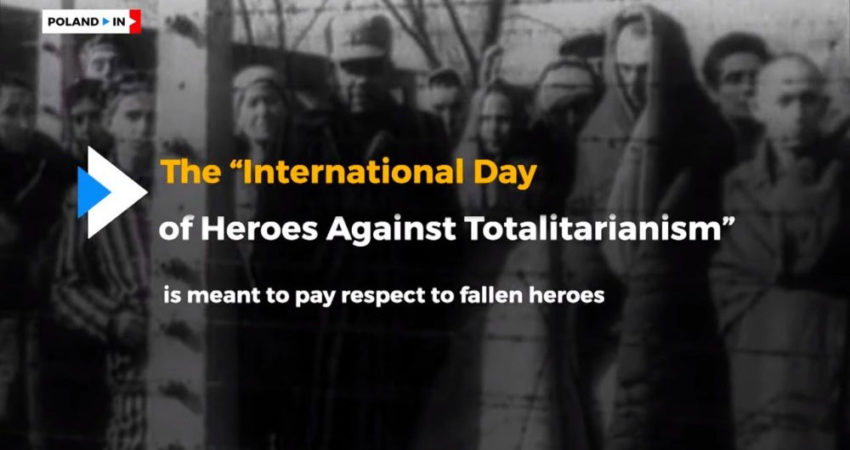 The European Parliament adopted in connection with the 80th anniversary of the outbreak of WWII on September 20 a resolution to establish on May 25 –  the same date as the anniversary of the execution of the Auschwitz hero, Rotamaster Witold Pilecki, The International Day of Heroes of the Fight Against Totalitarianism. The resolution was supported with a clear majority of votes: 535.

Parliament stressed that the signing of the Molotov-Ribbentrop Pact and its secret protocols led to the outbreak of World War II and formed the basis of two totalitarian regimes: nazism and communism which divided Europe and independent countries into spheres of their own interests and influence.

It also stressed that promoting the view by Kremlin that Poland, the Baltic States and the West were the initiators of World War II is a dangerous component of the information war that aims to divide Europe.

2. Stresses that the Second World War, the most devastating war in Europe’s history, was started as an immediate result of the notorious Nazi-Soviet Treaty on Non-Aggression of 23 August 1939, also known as the Molotov-Ribbentrop Pact, and its secret protocols, whereby two totalitarian regimes that shared the goal of world conquest divided Europe into two zones of influence;

3. Recalls that the Nazi and communist regimes carried out mass murders, genocide and deportations and caused a loss of life and freedom in the 20th century on a scale unseen in human history, and recalls the horrific crime of the Holocaust perpetrated by the Nazi regime; condemns in the strongest terms the acts of aggression, crimes against humanity and mass human rights violations perpetrated by the Nazi, communist and other totalitarian regimes;

4. Expresses its deep respect for each victim of these totalitarian regimes and calls on all EU institutions and actors to do their utmost to ensure that horrific totalitarian crimes against humanity and systemic gross human rights violations are remembered and brought before courts of law, and to guarantee that such crimes will never be repeated; stresses the importance of keeping the memories of the past alive, because there can be no reconciliation without remembrance, and reiterates its united stand against all totalitarian rule from whatever ideological background;

5. Calls on all Member States of the EU to make a clear and principled assessment of the crimes and acts of aggression perpetrated by the totalitarian communist regimes and the Nazi regime;

6. Condemns all manifestations and propagation of totalitarian ideologies, such as Nazism and Stalinism, in the EU;’’

7. Condemns historical revisionism and the glorification of Nazi collaborators in some EU Member States; is deeply concerned about the increasing acceptance of radical ideologies and the reversion to fascism, racism, xenophobia and other forms of intolerance in the European Union, and is troubled by reports in some Member States of collusion between political leaders, political parties and law enforcement bodies and the radical, racist and xenophobic movements of different political denominations; calls on the Member States to condemn such acts in the strongest way possible as they undermine the EU values, of peace, freedom and democracy;

8. Calls on all Member States to commemorate 23 August as the European Day of Remembrance for the victims of totalitarian regimes at both EU and national level, and to raise the younger generation’s awareness of these issues by including the history and analysis of the consequences of totalitarian regimes in the curricula and textbooks of all schools in the EU; calls on the Member States to support the documentation of Europe’s troubled past, for example through the translation of the proceedings of the Nuremberg trials into all EU languages;

9. Calls on the Member States to condemn and counteract all forms of Holocaust denial, including the trivialisation and minimisation of the crimes perpetrated by the Nazis and their collaborators, and to prevent trivialisation in political and media discourse;

10. Calls for a common culture of remembrance that rejects the crimes of fascist, Stalinist, and other totalitarian and authoritarian regimes of the past as a way of fostering resilience against modern threats to democracy, particularly among the younger generation; encourages the Member States to promote education through mainstream culture on the diversity of our society and on our common history, including education on the atrocities of World War II, such as the Holocaust, and the systematic dehumanisation of its victims over a number of years;

11. Calls, furthermore, for 25 May (the anniversary of the execution of the Auschwitz hero Rotamaster Witold Pilecki) to be established as International Day of Heroes of the Fight against Totalitarianism, which will be an expression of respect and a tribute to all those who, by fighting tyranny, demonstrated their heroism and true love for humankind, and will also provide future generations with a clear example of the correct attitude to take in the face of the threat of totalitarian enslavement;”

Witold Pilecki (13 May 1901 – 25 May 1948) was a Polish cavalry officer, intelligence agent, and resistance leader. He served as a Rotmistrz (captain) with the Polish Army in the Polish-Soviet War, Second Polish Republic and World War II. He was a co-founder of the Secret Polish Army, a resistance group in German-occupied Poland, and later a member of the underground Home Army (Armia Krajowa).

After the war, when Poland fell under the influence of the communists he remained loyal to the London-based Polish government –in-exile. He  was arrested for espionage in 1947 by the Stalinist secret police on charges of working for “foreign imperialism” . In a show trial, he was sentenced to death and executed on May 25, 1948. His remains were still not found.