EIOCO > Publications > The Romanian Revolution of 1989

The Romanian Revolution of 1989

Events in Timisoara in mid December 1989 mark the begin of the Romanian Revolution which led to the death of the communist dictator Nicolae Ceausescu and his wife Elena, the end of 42 years of Communist Rule in Romania, which was the last removal of a Marxist-Leninist government in a Warsaw pact country during the events of 1989 and the only one which took so violent forms.

Ceausescu started in 1981 an austerity programme intended to liquidate its entire national debt of $10 billion. To achieve the target the standard of living of Romanian people drastically deteriorated. Many basic goods including gas, heat and food were rationed. Romanians at this time faced problems of malnutrition and the highest infant mortality rate in Europe in the 1980s.

In mid-December 1989 the Romanian communist government intended to evict the pastor László Tőkés from the Hungarian Reformed Church. The supporters of the pastor protested against the eviction. Nicolae Ceausescu ordered Militia and Securitate ( secret service, one of the largest in Communist countries) to continue with the eviction and to re-establish the order. This led to more protests, protesters were shouting Romanian anti-communist, were destroying communist flags, Ceausescu’s portraits. Each intervention of communist forces led to more unrest and the opposition of more protesters. The communist law enforcement services attacked the protesters with tear gas, water jets, the army used tanks and opened fire.

Timisoara went on a general stike on December 20. The formation of the revolutionary committee called the Romanian Democratic Front (Frontul Democratic Român – FDR) by one of the protest leaders Ioan Lorin Fortuna was initiated. They specified their requests during the talks with the Prime Minister Constantin Dascalescu. The requests included investigation on the killings which preceded the talks, setting free arrested protesters, and allowing a free press.

On the same day Nicolae Ceausescu delivered a speech on TV in which he condemned the events in Timisoara and accused foreign countries of involvement in Romanian domestic affairs. The day after the leaders of the FDR presented the Proclamation to protesters.

Nicolae Ceausescu during the rally which he organized in which tens of thousands people participated promised to increase salaries, children allowances, retirement funds, etc. But his ‘’supporters’’ fled and the law enforcement forces intervened violently against anti-communist protesters. Tear gas, water jets were used and shots were fired. This happened in all protesting towns in Transylvania, too.

The establishment of the National Salvation Front Council whose purpose was to organize free elections and lead the country was announced. Ion Iliescu presented the Statement of the National Salvation Front Council to the Country (CFSN). The document presented the main targets of the revolution: introduction of democracy, dissolving of the Ceausescu regime, ensuring freedom and dignity of the Romanian people, ensuring power taken over by the CFSN and the Superior Military Council, which would later on establish local branches providing local government.

The army was ordered to support the revolution and prevent further violence. But the violence was present. Some former Securitate agents were attacked by angry revolutionary groups. Military units were attacking each other.

Nicolae and Elena Ceausescu were caught at Targoviste. Fightings and acts of terror continued therefore the CFSN introduced exceptional measures calling for an immediate ceasefire in the country, the trial of the Ceausescus, the confiscation of weapons from civilians and the unification of the armed forces.

Nicolae and Elena Ceausescu were accused on 25 December 1989 at Targoviste by the Exceptional Military Court of genocide (64,000 deaths during their regime), undermining state power and the national economy and diversionist acts. They were sentenced to death and all their possessions were confiscated. Nicolae and Elena Ceausescu were shot dead by a firing squad. The Romanian Television broadcasted the news of the Ceausescus’ execution and the images of the dead bodies of Ceausescu and his wife were spread all around the world.

The fighting stopped and the CFSN appointed Petre Roman as Prime Minster of the provisional government.

The first meeting of CFSN took place on 27 December to order elect its officials (President – Ion Iliescu, Vice-President – Dumitru Mazilu) and adopt the new symbols of the country.

Years later, Romania became a member of NATO and the European Union: in 2004 and 2007, respectively.

Photo: Bucharest. The copyright holder of the image: The National History Museum of Romania (though the Project Communism in Romania) 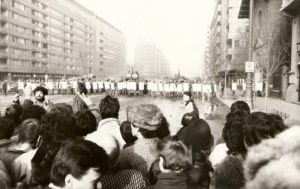 The article was published on the website of the Central and Eastern Europe Center Communications-Unlimited.nl: