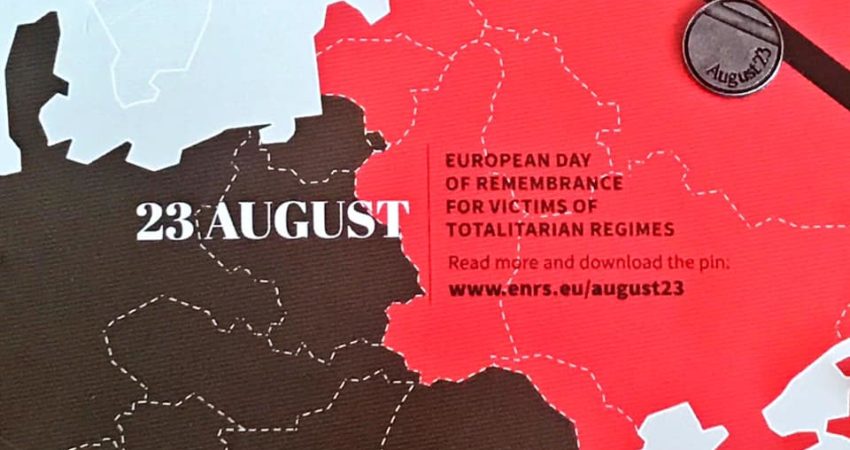 Eighty years after the strike of the totalitarian powers

You could already smell war in the air in the summer of 1939; unlike in 1914 when after the murder of Austrian crown prince Franz Ferdinand and his wife it was thought for weeks that it would not go so fast. Hitler’s desire for war was too uncovered in 1939. Yet August 23 brought a huge surprise. For most countries it was a highly unpleasant surprise. The apparently greatest opponents of each other – Hitler’s Germany and Stalin’s Soviet Union – found each other. In the Molotov-Ribbentrop pact, named after the two foreign ministers, they promised not to attack each other, even if one of the two countries would go to war with a third party.

Molotov and Ribbentrop signed the agreement under the benevolent supervision of Soviet dictator Stalin. He bought time and thought he would keep Hitler off himself. Hitler assured himself of the possibility of invading Poland without hindrance; what he did eight days later. Although the Western countries declared war on Germany, they were powerlessly watching from afar how Hitler ran over a militant Poland.
The biggest venom of the Molotov-Ribbentrop pact, however, was in a secret protocol. Nazi Germany and the Soviet Union divided a few intervening countries into spheres of influence. West and Central Poland were for Germany; Eastern Poland, the previously independent Baltic States (Estonia, Latvia, Lithuania) and Bessarabia for the Soviet Union. More than two weeks after the German invasion of Poland, Stalin invaded the east of the country. Eastern Poland was occupied by Stalin and became acquainted with communism.

The most notorious legacy was the massacre at Katyn. Several thousand Polish officers were found there later during the Second World War. Because Nazi propaganda minister Goebbels was devotng lots of attention to this matter, the Soviet Union could put the mass murder in the shoes of Nazi Germany for a long time. In the last days of the Soviet Union, in 1989-1990, the country recognized that the Polish men found in Katyn were victims of a deliberate extermination by the communist regime in Moscow. The decision was taken at the highest level in the Politburo. The Communist rulers eliminated men from the Polish elite to reduce opposition to the implementation of communism. Today, it is estimated that around 22,000 Polish officers and intellectuals were killed in the Kremlin by order of the Communist rulers.

The three Baltic states initially remained formally independent, but they had to tolerate the Soviet Union’s intervention under pressure from the impending Red Army. In June 1940, more than a month after Hitler’s invasion of the Netherlands, Belgium, Luxembourg and France, Stalin incorporated the Baltic states into the Soviet Union. In one year, at least 130,000 Estonians, Latvians and Lithuanians were murdered or taken to Siberia by the Communists. This was more than 2% of the then total population of the three countries. Later, the Baltic states received Hitler’s troops and, after a few years, the Red Army again. In those years, the total number of victims of first National Socialism and then (again) Communism from the period June 1940-June 1941 was very far exceeded.
In the run-up to 1941, Stalin ignored all warnings and signs that Hitler would invade the Soviet Union and thereby violate the Molotov-Ribbentrop pact. But where Stalin made himself a victim of wishful thinking on August 23, 1939, the real casualties among civilians in the countries between Germany and the Soviet Union were, by Hitler, and by conscious order of Stalin and his communist co-rulers. On August 23, 1939, a pact was signed that would destroy the lives of hundreds of thousands of citizens. The greatest totalitarian representatives of National Socialism and Communism made a bloody covenant. Germany and the Soviet Union also practiced old-fashioned power politics of large countries, while denying the right to exist of smaller countries.

The European Parliament proclaimed “Black Ribbon Day” on 23 August; a country like Canada has made this date a memorial day. For all liberal democracies, it should be a question of reflecting on the value of freedom, human rights and national self-determination on this day.

Photo: Ministry of Foreign Affairs of the Republic of Poland