Interview by Beata Bruggeman-Sękowska with David Hill and Ilona Karwinska, directors of ‘Neon Muzeum’ in Warsaw, first and only museum of its kind in Europe about neon signs in Poland and Hungary in communist times. 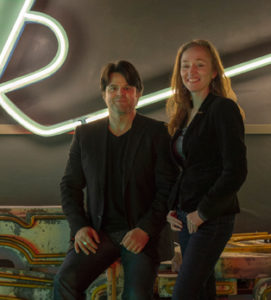 Beata Bruggeman-Sękowska: You are Poland’s unofficial ambassadors of neon signs. How did it start? Why did you decide to preserve neon signs from the Cold War period?

David Hill and Ilona Karwinska: During a visit to Warsaw in 2005 we noticed some extraordinary – but decaying – neon signs. We were immediately struck by their strange messages, striking design and unique letterforms and we almost spontaneously set about undertaking a photographic documentation project.  With the combined interest of a British/Bermudian graphic artist and typographer (in David Hill) and a Polish/British photographer (in Ilona Karwinska) we set off on an unexpected journey – uncovering a once enormous state-sponsored ‘neonisation’ campaign. This quickly evolved into activism and the saving of numerous neon signs along the way. Since then we have uncovered a rich and untold history of Polish and Hungarian graphic design, and the last doomed propaganda campaign of a dying communist regime.

When was your museum founded and how big is your collection?

We officially opened a permanent museum in 2012 after organising a number of successful ‘pop-up’ exhibitions. The Neon Muzeum is the first and only museum of its kind in Europe – if not the world and we bring in over 100,000 visitors annually. Our collection of neon signs and symbols now runs in to the hundreds – at the last inventory count it was well over 300.

Neon signs in Cold War period started to shine after Stalin’s death, during “Khrushchev thaw’’. In 1955, the Ministry of Internal Trade established sets of rules concerning the neon signs. Why did communist introduce neon signs?

The Poznan rebellion and Hungarian revolution in 1956 so concerned the Soviets that a new way forward was proposed to placate and subdue growing public anger and avert further unrest.  urging conferences in Czechoslovakia and Moscow it was argued that these neon signs would offer the promise of a brighter future… a cultural and economic revival would soon follow they proclaimed. The neon signs were to represent soft and colourful projections of power and despite the obvious propaganda ambitions, the era of ‘neonisation’ began. 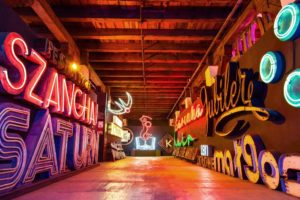 That’s correct, the communist authorities were brutally anti-free market, therefore these neon signs could not be suggestive of commercial advertising practises. They must only be used to ‘inform, educate and amuse’ as one propaganda film proclaimed – a new way of guiding oneself through the urban socialist landscape. The authorities would not tolerate brands and logos, and competition of any kind was banned… even in the neon signs making business. The three major manufacturers of neon signs (The Light Publicity Cooperative ‘Lumen’, The Worker Cooperative ‘Spójnia’ and ‘Reklama’) were deemed too commercially competitive amongst themselves and hence merged into a single entity – Reklama (ironically meaning ‘advertising’). Therefore, the ‘neonisation’ of Poland and Hungary began a strange new form of applied art – weird and whimsical symbols indicating where you might find a library – via a Mermaid sitting on an open book, or your local Milk Bar (diner) symbolised by a giant cow hugging a milk bottle. Sweet neon piglets for butchers shops, bubbles and teddy bears for toys shops, giant neon aeroplanes and globes for travel agencies etc. Hundreds of thousands were produced for almost every aspect of national cultural and industrial life.

Were neon signs a tool of communist propaganda? In what way?

Yes, they were possibly the most visible of all propaganda mediums at the time… permanent state messages in neon light – ‘all is well’ when clearly all was not. Even if you could find products in stores and had the money to buy the items, you would find they were not what you (or the public) needed. This dysfunctional central trade body and projection of power by the State became an ironic joke to the citizens, who instead saw the signs as landmarks and meeting points with friends.

Were they also a form of protest against communism? In a hidden form?

We believe so, and there is some evidence of subversive messaging and protest in the neon design.  The famous butcher shops ‘three little piggies’ representing three well-known corrupt officials is one such possibility.

In communism you were not expected to complain…How did those living next to shiny lights react to neon signs? Did they simply have to learn to live with them?

There is little evidence of public complaints against the neons – despite many thousands living with giant, buzzing and flashing signs outside their apartment windows. The neon “PKO Savings” in Nowa Huta, Krakow, prevented reception of radio and television. Residents did not give up and directed the case to the district court. In 1962, neon stood before the court. It was the first such trial for disturbances caused by ozone gases. Due to censorship at the time the court verdict is unknown. One other famous complaint was brought up by a woman in Warsaw who lived behind a giant bouquet of flowers on Al. Jerozolimskie. Although she was the mistress of a powerful minister, it was the woman who was eventually moved, not the neon sign. 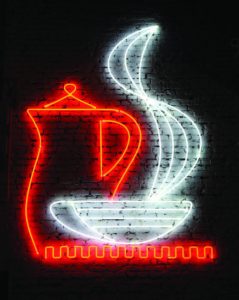 Who were the most famous neon signs artists in Poland? And which were their most famous works?

The state only hired the best graphic artists of the day – those who were already known to the authorities for their avant-garde graphic design – the so-called ‘Polish Poster School’ as they are famously known today. This group were commissioned to create the neon landscape despite having no technical knowledge of the limitations of neon sign making. Therefore a creative purity came through in their early design work and this is what primarily interests us as an institution. There were many famous names in this ‘Neon Group’ such as Jan Mucharski, Maksymilian Krzyzanowski, Zbigniew Labes, Tadeusz Rogowski to name but a few.

What were the iconic neon signs?

So many neon signs became iconic and memorable to the residents and visitors to Polish and Hungarian cities… almost too many to mention.  Of course, today these must include the enormous neon globe (the original is now in our collection) for the Orbis Travel Agency on Al. Jerozolimskie, and Spolem Sam supermarket neons from ul Marszalkowska. The stunning Volleyball Player (Siatkarka) designed by Jan Mucharski on Plac Konstytucji also deserves a mention because it still works to this day ! 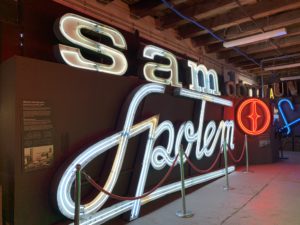 Sadly, the creative processes began to deteriorate by the late 70s and 80s. The great neon designers had retired and the economies of Poland and Hungary were faltering – meaning the signs were becoming too expensive to manufacture and repair. Therefore, many of the signs were ‘designed’ in-house by technicians rather than artists. This meant they often referenced standardised Swiss typefaces – Helvetica and frankly ugly brush scripts – and made with unsuitably poor quality materials. This was death knell for the great ‘neonisation’ campaign, and with the emergence of Solidarity, the end of communism.

What happened to them afterwards?

The aftermath of the end of communism meant that any conspicuous reminders of the oppressive occupation were expunged. Neon was one such symbol in the eyes of the new democratic governments. The truth is more likely that they were of no further use, advertising products and services long since gone, archaic symbols with no cultural or economic value – destined to be thrown in skips. This era of neon eradication was quaintly known as the ‘great recycling scheme’.  What remained were fortunately captured by Ilona Karwinska’s camera lens or saved by the Neon Muzeum. We have stripped away the negative political connotations and present them as culturally significant elements of a previously unknown – and undocumented – art form. 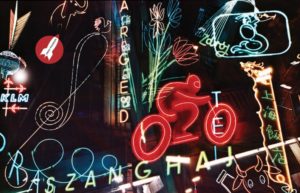 Interview was published by Central and Eastern Europe Center Communications-Unlimited.nl and is republished with permission https://www.communications-unlimited.nl/last-doomed-propaganda-campaign-of-a-dying-communist-regime/