80 years ago communist, soviet, Stalinist murderers committed one of the biggest crimes of the 20th century: Katyn Massacre. 22,000 citizens of the Republic of Poland, Polish military offices, policemen, intelligentsia were brutally murdered because they were ardent patriots.

On April 3, 1940, from the camp in Kozielsk, which was one of three large camps for Poles, the first transport of prisoners directed for execution set off to Katyn.

In the spring of 1940, fulfilling the VKP(b) CC Politburo resolution from 5 March 1940, the Soviet political police – the NKVD of the USSR – has killed nearly 22,000 citizens of the Republic of Poland. Among them there were 14 500 prisoners of war – officers and policemen – from the camps in Kozelsk, Starobelsk and Ostashkov and 7,300 prisoners arrested in the eastern part of the Poland, occupied by the USSR.

The USSR authorities decided to kill thousands of defenseless prisoners because they did not succumb to the propaganda carried out against them and have remained the ardent patriots, ready to fight for free Poland against the Soviet occupant.

The government of Nazi Germany discovered the mass graves in the Katyn Forest in April 1943. However, the USSR claimed that the Nazis were responsible for killing the victims. The USSR continued to deny responsibility for the massacres until 1990. 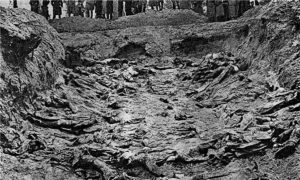