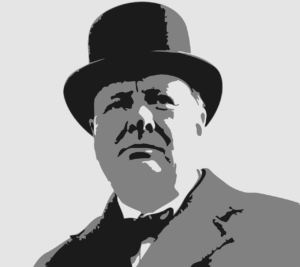 On March 5, 1946, Winston Churchill gave a speech  in Fulton, a city in Missouri, USA. The British war leader, Prime Minister until more than six months earlier, received an honorary doctorate from Westminster College in Fulton. He began his speech in a Churchillian way by saying that the name Westminster seemed familiar to him.

After the light-hearted opening, he turned to serious matters: the state of the world and the role for America in particular as the new world power. Among his audience was the President of the United States: Harry Truman. Two things had to be prevented, according to Churchill, to ensure security, welfare, freedom and progress for the people: war and tyranny. That war had to be prevented did not need any explanation after six years of the Second World War. Churchill mainly discussed the role of the new international organization, the United Nations. It had to be equipped with armed forces as soon as possible, and Churchill suggested starting with aircraft squadrons to be provided by member-countries. Above all, knowledge about nuclear weapons should not be shared with the UN. That knowledge was safely in the hands of the United States, but would not be if a communist or fascist regime obtained it.

And that brought him to the most famous part of his speech: his warning against (the new) tyranny. The freedoms enjoyed by individual citizens in the West did not apply in many states. There, where one privileged party was in power, ordinary citizens were controlled by a political police. The West was unable to intervene in such countries. But the West had to uphold its own values and be aware of the possible expansionist plans of the Soviet Union.

Part of the European continent was already under direct control of Moscow. “From Stettin in the Baltic to Triest in the Adriatic an iron curtain has descended across the Continent. Behind that line lie all the capitols of the ancient states of Central and Eastern Europe. Warsaw, Berlin, Prague, Vienna, Budapest, Belgrade, Bucharest and Sofia, all these famous cities and the populations around them lie in what I must call the Soviet sphere. ” The traditionally small communist parties in this part of Europe already exercised disproportionate power and sought totalitarian control. There was, with the exception of Czechoslovakia [only briefly; PvS], no real democracy.                Western democracies were to cooperate against tyrannical communism, uphold their own principles, and show the Russians the one thing Moscow respects: military strength.

A week and a half after George Kennan’s “Long Telegram” sent from the US Embassy to Washington, analyzing the Soviet Union’s foreign political goals, Churchill’s open warning in Fulton contributed to a growing sense of reality. The Soviet Union, a temporary ally against Nazi Germany, posed a new threat. The communist regime oppressed its own population and those of the conquered countries. Central and Eastern Europe had not been liberated, but had been given a new occupier. The West, under the leadership of the United States and the British Commonwealth, should stand firm in defense of its own freedom. The Cold War began. It was important not to have these fought out on battlefields.

An early sketch of the communist sanctuary